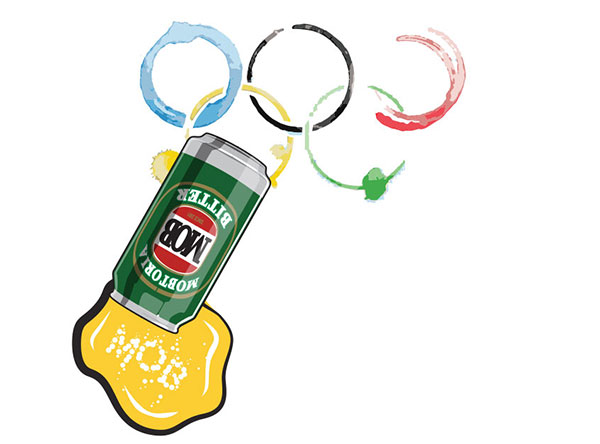 Since that day in 1993 when Juan Antonio Samaranch uttered those words, the current generation of Australians have been enthralled by a certain quadrennial summer sporting event. From the amazing party in Sydney in 2000, to the streets of Rio in August this year, Aussies are glued to their sets every four years with a hunger to consume sporting feats that they otherwise couldn’t care less about for 3 years, 11 months and two weeks.

MOB is not immune to this craze.

So this year October at Byron Bay, we’ll be competing in:

– It’s an Olympic year, and the first time Rugby Sevens has been at the games.
– Over the last two years our jersey has ripped off two of the world’s leading brands – Monopoly & RWC, so it seems fitting that we breach the world’s most recognised trademark. Just don’t tell anyone. (Ok that’s just a joke if any trademark lawyers are trawling the net).

MOB embodies this by not winning, but certainly taking part.

The Olympic motto consists of the Latin words “Citius, Altius, Fortius”, which means “Swifter, Higher, Stronger.” The motto, introduced in 1924, is meant to spur the athletes to embrace the Olympic spirit and perform to the best of their abilities. For Byron 2016 we’ve adapted it a little. Our motto: “Veteris, Crassus, Ebrioso”, or, Older, Fatter, Drunker.

In addition to our legendary kit that will reflect the tour theme, as we have done the last two years, we will engage in a series of activities off-field to get into the spirit of things.

5 events – MOBern Pentathlon perhaps? All drinking or drinking related games including a final event at Kangaroo Court on Saturday evening. Comprising a mixture of events in pubs and various locations around town e.g. beach/pool. This will be a mixture of team and individual events. Some initial suggestions & ideas include:

We’ll also have a number of things going on throughout the tour, which may or may not involve: Olympic volunteers (watch out rookies!), accreditation, a torch and of course medals.

What You Need to Do

These events, challenges and activities are not yet set in stone. We want your input!

Submit your ideas on potential events and activities through the MOB Facebook group by October 1 and these will be decided in the usual partially democratic process we employ each year. We’ll then announce the plans and prepare the props, so to speak.

So get the banter going and let the games begin.