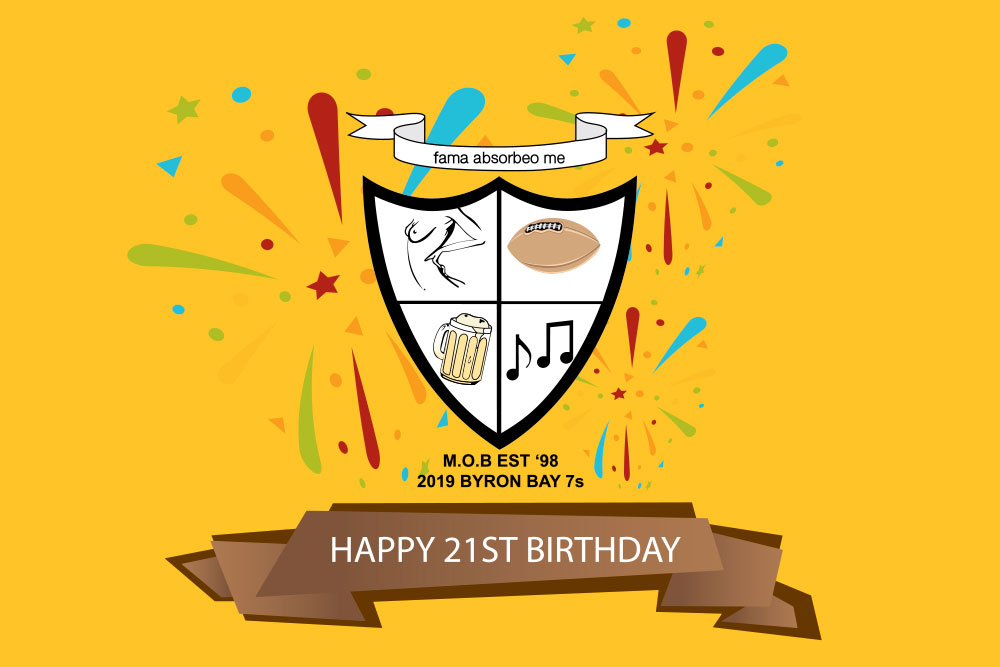 A 21st birthday is a big deal.

In medieval times it represented a boy being ready for knighthood. In modern times it is widely recognised as a coming of age. Now that MOB has survived 21 years it means MOB can finally drink in the USA.

And so it is worthy of significant commemoration and celebration at the 2019 Byron Bay Sevens Festival, and event that is synonymous with MOB.

This year’s event is a chance for us to look back, to reflect on what (little) we have achieved in those 21 years. Taking some of the great memories throughout that time and reliving them, all whilst creating plenty of new ones. If only we could bloody well remember what we actually did.

This year is also unique in that it’s quarter finals time at the Rugby World Cup, so there is plenty of match action to be integrated into our activities.

What do Clan Macarthur, a flamingo and a surfboard have in common? You’ll find out soon enough. 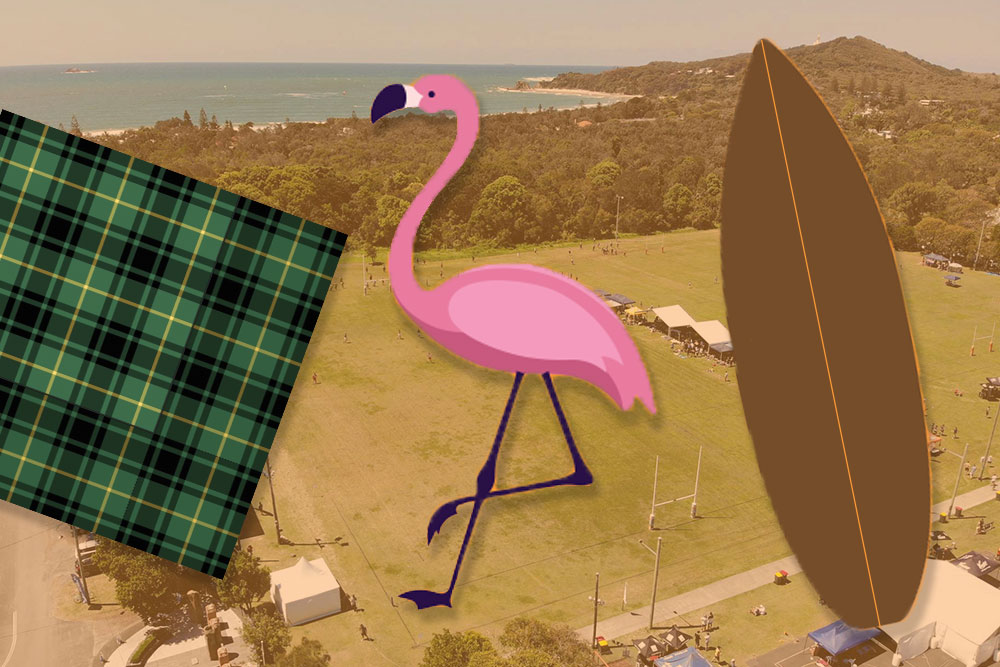 This year’s playing kit will be fully revealed on the evening of Friday 18 October at the annual presentation ceremony. Off-field elements will be provided to tourists throughout the day as they arrive on the shores of Australia’s most easterly point. This year’s kit is a tip of the hat to MOB’s roots, including playing strips of the past, albeit with a distinct party flavour.

Each tourist that has booked and paid thus far will be issued the following:

And so, with consultation from the wider touring group, the MOB Brainstrust has carefully crafted a selection of activities to guide us through the weekend.

A number of players are arriving in time to join in the Byron Bay All Stars Long Lunch. For this you’ll need your tour Number 1s in the form of off-field shirt to be provided by Phat.

Then the majority of the group will convene on the beach around 5:00pm for the welcome ceremony and jersey presentation. we’ll have a couple of party games to help us get in the mood.

Here each tourist will be assigned in groups to help organise one of the weekend’s upcoming activities, to ensure its smooth operation.

Between games 1 and 2 we hit the Bowlo for our official 21st birthday party. A couple more party games will happen, including ye olde favourite from medieval times, King’s Cup.

Between games 2 & 3 we’ll introduce a little competition in the form of a slip & slide relay at the ground.

Game 3 wraps up around 4:10pm and the Wallabies kick off just two hours later, meaning it will be a swift and brutal KK session. We have a couple of new rules we’re introducing here, but for a look back on general Kangaroo Kourt rules and decorum, take a look at this post from a couple of years ago: https://gothemob.com/kangaroo-court-proceedings/

Each of the four Rugby World Cup matches will involve a few activities where you and your teammates are drinking for special moments in the match.

Nursing an almighty hangover, we expect to the field sometime around 10:30 for our first, and typically only match of the day on Sunday.

We’ll have a couple more party games to keep us occupied while we enjoy the rest of the 7s action and prepare for the night’s RWC matches.

In addition to the various drinking related activities and events, there are a number of rules that tourists must abide by at all times. These will also be revealed on Friday.

There’s a few things you’ll need with you at this trip.

Feel free to bring and wear anything else you feel will be suitably festive to celebrate our 21st birthday.

That’s it for now. Further discussion will take place in the secure confines of one of our chats.

Now go forth and conquer, Sir MOB of Byron.