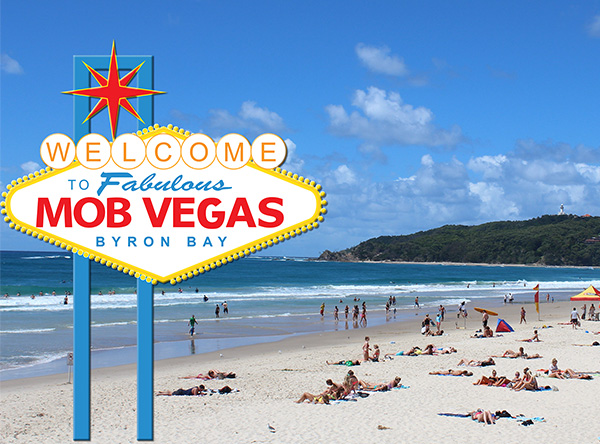 The countdown to the 2017 Byron Bay 7s is well and truly on, which means MOB management are frantically organising the tour itinerary and MOB tourists (and hopeful tourists) are frantically trying to earn brownie points.

One important element…the theme. It’s always tough to decide which theme to go with: there are numerous great ideas sitting in the can, but in recent years it seems the bar has been raised (or lowered, depending on your perspective), to evolve from more than just a kit design, into an intricate itinerary of activities, behaviours and misdemeanours. See recent examples such as 2014’s MOBopoly, 2015’s MOB World Cup and 2016’s MOBlympics. So, in 2017 it’s…

This year MOB will be channelling The King as they high roll into that “Bright Light City” – The Strip of Jonson Street Byron Bay.

Why not? But really, we wanted to recreate in some way that magnificent MOBopoly-esque game play with the board game, cards and dice, so we thought what better way than to go all-in on card and dice games.

In addition to fabulous kit that will reflect the tour theme, we’ll have a series of events and activities based on the typical things you’d experience on a trip to a Vegas casino. This is where you MOB tourists come in

Like we’ve done in recent years, we’ll have four or five official events, loosely based around casino games, such as:

We’ll also have a number of things going on throughout the tour, including something very special on Friday 13 October.

What You Need to Do

These events, challenges and activities are not yet set in stone. We want your input!

Submit your ideas on potential events and activities through the MOB Facebook group by September 15 and these will be decided in the usual partially democratic process we employ each year. We’ll then announce the plans and prepare the props, so to speak.

So get the banter going and start listening to Elvis!