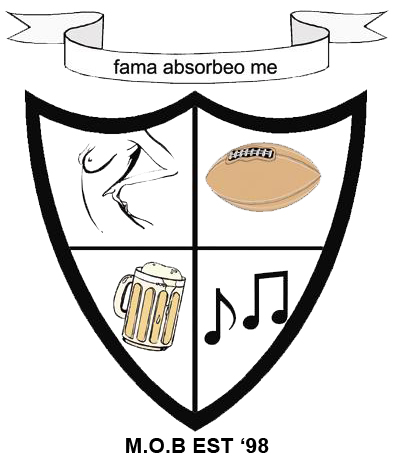 We’ve started to document the history of MOB, courtesy of a random email from the illustrious MOB 001. So grab a beer or a black rat in true MOB fashion and read on…

Macarthur Old Boys (M.O.B) was formed from a select group of men who represented the mighty Moose at University Games both ECG and Nationals. The UWS Macarthur rugby union team that contributes to MOB played their first games in the esteemed Poo and Wee in 1995 when Macarthur hosted the Eastern Conference Games at Milperra. Barely a team was cobbled together over the four days of competing and a training session was no where to be seen, but, there was a team and there was some efforts on the field and then there was by all accounts a fair few enjoying the wilds of the evening. The first names in the MOB numbers are honoured with early numbers and many forged their bonds in an amazing early triumph over the mighty UNSW golds. No one expected us to compete with the second division heavy weights, but, Macarthur (much like many of our mandatory readings for our undergrad degrees) did not read the script. Winning a famous victory. Sneakers earned his nickname at this very event having turned up to watch the poo and wee (our first groupie), this did not preclude him from being an automatic selection in the line out, playing in his Sneakers it went on to spawn a well travelled and illustrious rugby career. Reflecting on such old times, it is hard not mention a fellow by the name of Justin Turtle who produced a scintillating chip and chase at some stage this week to entrench the pizazz and the glitz and the general messiness that is entrenched in MOB. Hats off to the originals who were part of that week and for what they achieved. Despite the legacy of the poo and wee in MOB only the 95 originals were given a chance to play in the colours.